1000 aeroplanes crashing in the night - aspire to be forgotten (emp020) 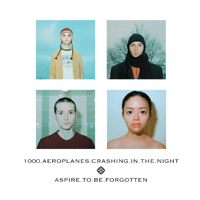 1000 aeroplanes crashing in the night - aspire to be forgotten (emp020)

1000 Aeroplanes Crashing in the Night is a loosely knit musical collective consisting of up to 8 members. We are spread out from Murfreesboro, Tennessee, USA to Knoxville, Tennessee, USA to Asheville, North Carolina, USA to Minneapolis, MN, USA to Barrow-in-Furness, Cumbria, United Kingdom.

We have one ep, the "Ambient Trikcs" recording, which is available for free from d/a73 gallery + imprint in high quality MP3 format.

LIVE SHOWS
We do not currently play live shows and do not know if we wish to in the future. Thank you for your requests.

COMING SOON
Symphony 1 (for Automobiles) - a formally structured symphony with the only instrumentation being that of multiple automobiles {d/a73 gallery + imprint}
(announced) "Falling" compilation - a compilation recording assembled by Shaun Blezard of Clutter's Earth Monkey Recordings featuring the track ‘even ms. butterfly knows the sun shall set on every empire’
(announced) "The World is Wider Than a Postcard" - a multimedia compilation to be released by Earth Monkey Recordings and curated by 1000 Aeroplane's David Wright LaGrone

Uploaded by sloblizard on September 7, 2006